The reporter backed out of our interview because he didn’t get the answer he wanted to the first question, which was, “Why are the first 30 days after the autism diagnosis so critical?” What phases, fears, and feelings will parents go through in that first 30 days? What should they do and be in those first 30 days?

My answer–which I stand by today, years later—was that the first 30 days are no more critical than the 30 days that follow, and next 30 days, and the next. If parents take the first 30 days to do nothing more than acclimate to the idea of the journey ahead, that’s time very well spent. Understanding autism is a process, not a timed event. 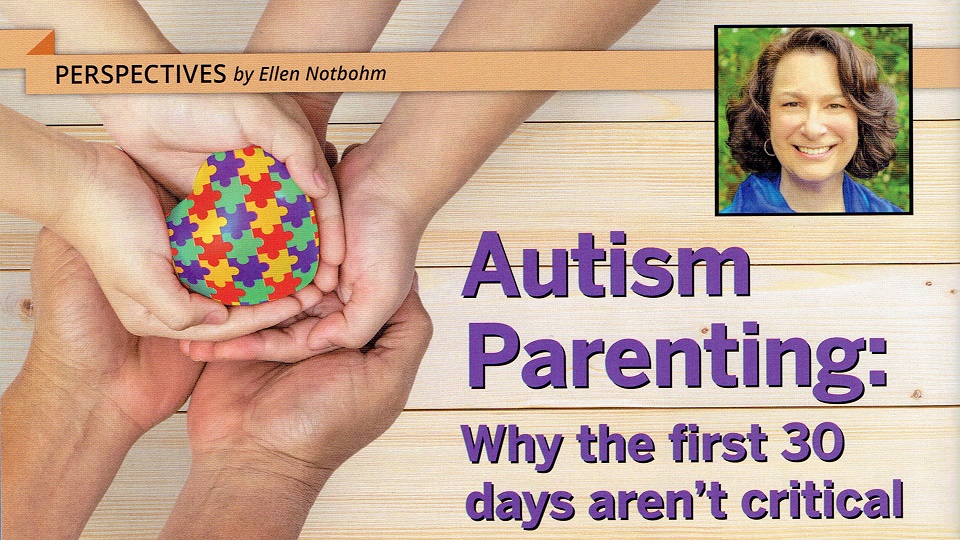 There’s nothing magical about 30 days unless there’s a looming deadline such as insurance or school enrollment. Thirty days isn’t even the most common length of a calendar month. It doesn’t match the phases of the moon. I shun 30-day designations because they so often have a negative connotation, such as an eviction notice, jail sentence, or cancellation of a contract. It very often connotes the ending of an obligation, something that is the polar opposite of autism parenting, something that isn’t an option for us.

Or there is the “30-day challenge”—be it fitness, eating right, putting limits on personal spending, tossing stuff. You either do or don’t make progress toward your goals at the end of 30 days. But whether you’ve succeeded or failed, you get to walk away—something that isn’t an option for autism parents.

One educator disagreed with me. After a child has been diagnosed, he said, “There’s no time to lose! Parents need to snap out of denial.”

Do they? Here are some things that snap to mind:

The same above-mentioned reporter asked me, “How can parents really succeed during the first 30 days, not just ‘get through?’” I bounced that one back: Why do you think “getting through” is not success? What if a swimmer gets thrown into a body of water never before encountered. The temperature, viscosity, opacity, and chop of the water are unlike anything the swimmer has ever experienced. Visibility is low, s/he has to swim without knowing how far to solid land, or how far down the bottom, or what creatures lurk below the surface. The swimmer made it to the other side, but with a drastically longer time than her/his usual personal best. S/he “got through.” How is this not success? How is this not an achievement of courage, tenacity and endurance?

A popular metaphor claims raising a child with autism is a marathon rather than a sprint. I actually believe it’s more like a relay, with ever changing handoffs to new team members.* But whether marathon or relay, it suggests the need for some pretty intense prep, including conditioning, studying the route, anticipating the weather conditions, laying in the proper gear and supplies. Long distance runners don’t just step out the door and start running.

As autism parents, we become familiar with the passing of the mileposts, knowing there will be another and another and another, month into month, and we come to know that each 30 days that passes is an auto-renew opportunity to hone our skills, attitudes, and abilities, and ensure the best and smoothest possible transitions for our children, at every leg of the long-distance run we call life.

As reprinted with permission of author in Autism Asperger’s Sensory Digest, Feb-April 2020

Disclaimer from author: I don’t have a say in selecting the artwork when my work appears in magazines; I neither chose nor approved the puzzle piece motif. I never use it, as many autistic adults and parents of autistic children have told me they find it offensive.