“We called him Barney for short,” Mark Twain relates in Following the Equator. “We couldn’t use his real name, there wasn’t time.”

If you’re writing fiction, you won’t escape having to invent names for characters. Some authors find this fun, others agonize, still others wait for divine inspiration.

I excruciated over naming my real-life children and felt no different when naming the characters in my historical novel. Both are so permanent! Would the name fit the character, or should I bestow a name that deliberately did not fit? Does it have any unsavory associations that would be unfair to the character, or readers? Is it phonetic, or will readers be mispronouncing it in their heads all through the story?

Sometimes it felt like a riff on an old song. If you’re happy and you know it, overthink . . .

Maybe you’ll never get what one feisty ancestor of mine called “the frantic dithers” over character names like I did. But if you do, here are some avenues to explore.

For my historical novel The River by Starlight, I calculated a character’s birth year and consulted the SSA lists, going far enough down to find names that were interesting but not bizarre. Of course, there will always be the occasional character whose bizarre name is a necessary element of the story. Think Humbert Humbert (Lolita), Holly Golightly (Breakfast at Tiffany’s), Hannibal Lecter (The Silence of the Lambs), Willy Wonka.

Annie’s great-uncle and aunt believed all girls should be named Mary, and they inflicted that on their five daughters. Then they compounded the fright by giving them virtuous middle  names. Annie ticks them off on her fingers. “Mary Faith, Mary Constance, Mary Patientia, Mary Arete, and, taking utter leave of their senses at the end, Mary Mindwell. The legend,” she relates, “is that Mindwell did not. Mind well. As an adult she went by Mamie, keeping enough of the two Ms to aggravate her parents while she enjoyed a long career in burlesque in Chicago.”

And one more wise consideration from our sage Mark Twain: ” . . . when a teacher calls a boy by his entire name, it means trouble.” (Eruption). Test run your character’s name out loud—with a holler, a growl, a simper, a laugh.

The River by Starlight has been recognized with more than a dozen awards for historical, literary, regional, and general fiction. Its focus on maternal mental health and gender bias in the early 20th century explores a history rarely addressed in fiction. It is a popular book club selection for women’s and mixed gender discussion groups. Ellen enthusiastically attends book groups in person or via video or phone chat. 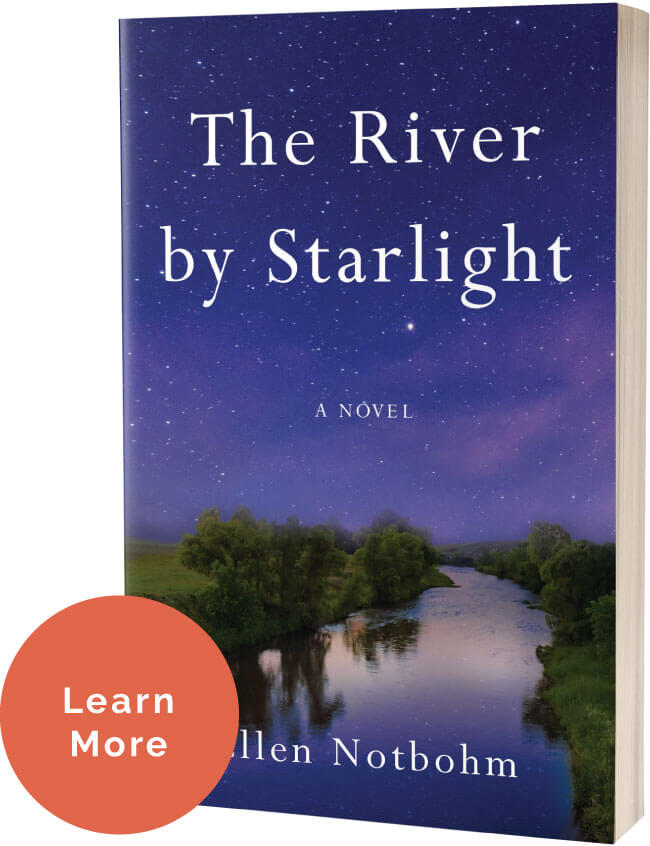